Congrats to all the winners in this years competition! 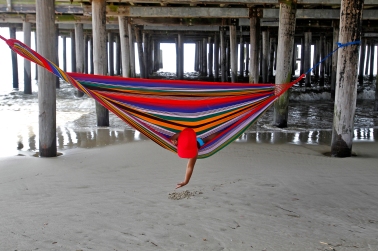 –Feature 1st Place: Jonathon Gruenke/Daily Press– Erica Carcamo, 4, plays in the sand while laying in a hammock as waves wash ashore underneath the pier of Buckroe Beach Friday morning. 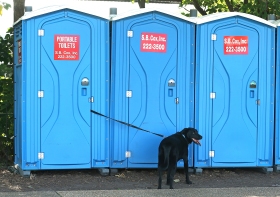 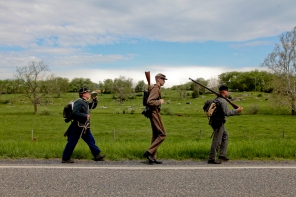 –Feature HM: Stephanie Klein-Davis/Roanoke Times–Jeff Durham, 30, a 2005 graduate of VMI, active duty stationed at Langley Air Force Base in Hampton, Virginia, in brown, Keith Holman, a 2004 graduate. and David Adams, 27, a 2009 Graduate of VMI from Smithville, Va., march along Route 11 from Steele’s Tavern to Staunton on Monday, commemorating the 15oth Anniversary of the Battle of New Market. (Stephanie Klein-Davis/Roanoke Times)

–General News 1st Place: Rob Ostermaier/Daily Press–Former Virginia governor Bob McDonnell is swarmed by local and national media after leaving the federal courthouse in Richmond. The jury in his corruption case did not reach a verdict after the second day of deliberations.

–General News 2nd Place: Mike Morones/Military Times–Steven R. Woods becomes emotional after receiving the flag for his father Army Staff Sgt. Lawrence Woods during a burial service on Friday, March 21, for seven service members who died on Oct. 24, 1964 near Bu Prang, Vietnam. The remains of Staff Sgt. Woods were recently identified though partial remains of six service members and the complete remains of an eighth crew member were recovered in 1964. 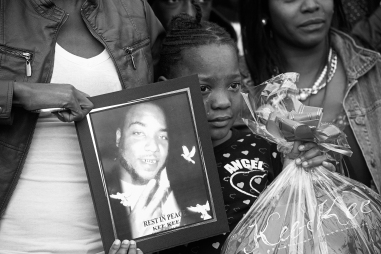 –General News 3rd Place: Scott Elmquist/Style Weekly–During a vigil, Keyari Edwards, 7, holds a photograph of her father Kiarri “Kee Kee” Edwards, who was murdered in a shooting on Dinwiddie Avenue.

–General News HM: Rob Ostermaier/Daily Press–Khori Allende-El of the Moorish Science Temple of America marches with about forty peaceful protestors up Jefferson Ave. to the Newport News Police headquarters. The march was held to draw attention to the situation in Ferguson, Missouri and to gun violence in general.

Gina Junkermann places running shoes with the message of “MEG STRONG WE LOVE YOU!” at the corner of Hickory Hill Road and East Patrick Henry Road in honor of Meg Menzies, who died a day before after being struck by a car driven by a drunken driver. 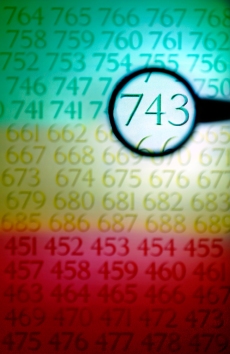 –Illustration 3rd Place: Nikki Fox/Daily News-Record–Don and Lindsay Denny act out part of the Christmas Story. The couple’s “retro house,” is one of the stops on the Downtown Holiday Tour in Harrisonburg this year.

–Lifestyle 1st Place: L. Todd Spencer/The VIrginian-Pilot–Three year old Layla Sawicki inside her home in Virginia Beach, Virginia, along with Nasyah her service dog who is trained to spot seizures in Layla. 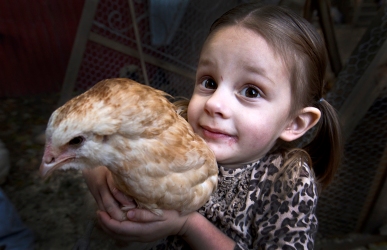 –Lifestyle 2nd Place: Joe Fudge/Daily Press–The city is making the this family get rid of their backyard chickens they have had since the end of the summer. Lauren Rash 3 picks up her chicken that she loves.

–Lifestyle 3rd Place: Daniel Min/Richmond Times-Dispatch –Rebecca Harris, foreground, and other Richmond Community High School 9th graders react to cold wave as they visit beach after the long day of their daily activities in Chincoteague. For some of them, this is their first time camping trip and being away from their parents as they grew up in urban setting and with single parents. “It’s a classroom that using a whole world as part of the learning tools. Bonding, share jokes they have, experience of being able to take care of themselves and their friends are really the other half of this trip,” teacher Summer Schultz said. 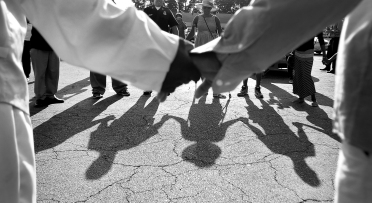 –Lifestyle HM: Rob Ostermaier/Daily Press–A group of about forty members of the community pray before a short protest march up Jefferson Ave. to Newport News police headquarters Wednesday as they try to draw attention to the situation in Ferguson, Missouri and the shooting of Michael Brown. 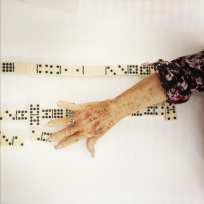 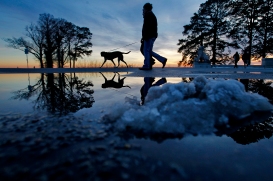 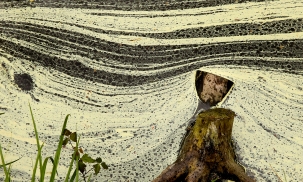 –Pictorial 3rd Place: Rob Ostermaier/Daily Press–Spring pollen washed away by heavy rain flows into Lake Maury near the Mariners Museum. Every spring the vehicles, houses and streets are covered with the fine yellow powder.

–Pictorial HM: Nikki Fox/Daily News-Record–A flock of Canadian geese settle down for the evening north of a Harrisonburg, Va., cornfield as Massanutten Mountain looms in the background on Feb. 11, 2014.

–Portrait 1st Place: Rob Ostermaier/Daily Press–Maurice Smith was the radio operator on a C-47 that flew through a wall of flack on D-Day to drop Airborne troopers behind the German defenders. Mr. Smith passed away two weeks after this photo was taken. 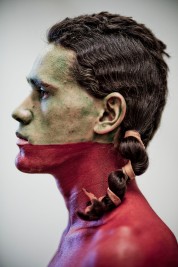 –Portrait 2nd Place: Jay Westcott/Freelance–Warren Taylor, a member of the Pamunkey Indian tribe, is dressed and painted for a ceremony commemorating the 400th anniversary of Pocahontas’ wedding to John Rolfe, on Saturday, April 5, 2014 in Jamestown, Va.

–Portrait 3rd Place: Griffin Moores/News-Leader–Kavon Robertson, who at 14-years-old has won six boxing championship belts, rests for a moment after a bout of hitting the punching bag at the Staunton Boxing Club on Wednesday, Sept. 10, 2014. Robertson is training for the chance to fight with the the U.S. Junior Olympic team in January.

–Portrait HM: Rich-Joseph Facun/The Virginian-Pilot–Hennglise Dorival, 15, who is from Haiti, at her host family’s home, Friday, April 25, 2014 in Virginia Beach, VA. Dorival suffers from a massive facial deformity caused by a tumor that began growing four years ago in one of the sinuses of her nose. This coming Monday, staff from Operation Smile will remove the tumor at CHKD through the World Care program. 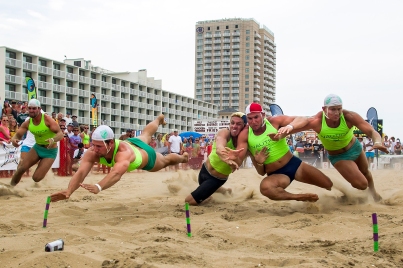 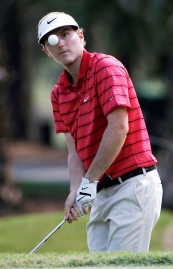 –Sports Action 2nd Place: Peter Casey/Freelance–Russell Henley chips up to the 1st green during the second round of The Players Championship at TPC Sawgrass – Stadium Course. 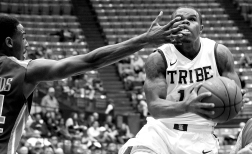 –Sports Action 3rd Place: Rob Ostermaier/Daily Press–Brandon Britt of William & Mary gets a hand across the face from Rodney Williams of Drexel as he drives to the basket during the first half at W&M. 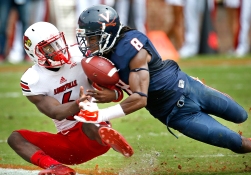 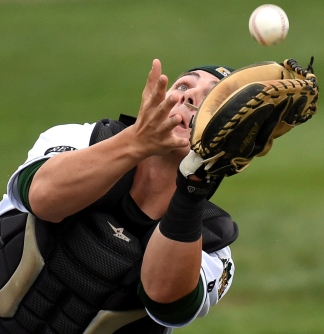 Lynchburg Hillcats catcher Joe Odom makes an out early in a game between the Hillcats and the Winston-Salem Dash Friday night August 8, 2014 at City Stadium in Lynchburg. 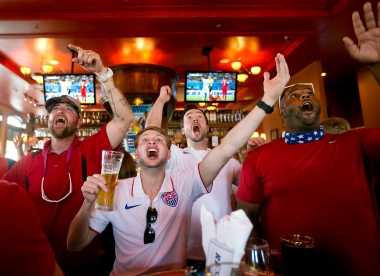 –Sports Feature 1st Place: Kaitlin McKeown/Daily Press–Tim Whitlock, Connor Stevenson, Everette Johnson and River Cypress react to a play while watching the first half of the United States versus Ghana World Cup game on Monday at Park Lane Tavern in Hampton. Stevenson described the game watching atmosphere as festive but tense. “It’s pretty much the best time you can ever have but it’s also nerve-wracking,” he said. “Everybody supports America, and that’s what it’s about. We’re all coming together for it.” 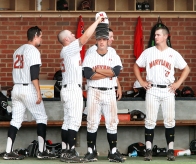 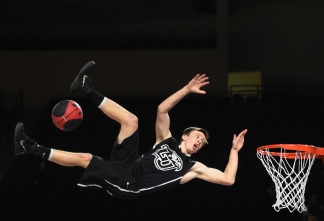 –Sports Feature HM: Max Oden/The News & Advance–Joshua Fowler, of the Liberty University S.O.A.R. Dunk Team, loses the ball between his feet as he flies through the air on a dunk attempt during halftime of a Liberty University women’s basketball game against VCU at the Vines Center. The team uses small trampolines to achieve their acrobatic dunks. 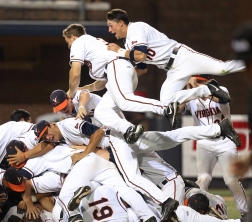 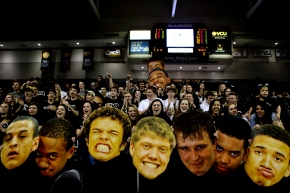 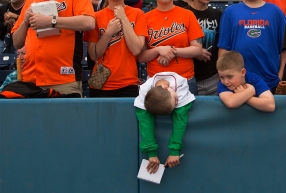 –Sports Feature HM: Bill Tiernan/The Virginian-Pilot–Cullen Kirk,9, of Virginia Beach( green sleeves) rests over the wall along third base during a break in light rain showers as he waits for Orioles players to sign autographs at Harbor Park Saturday afternoon, March 29, 2014 before the Orioles exhibition game with the Norfolk Tides. Cullen is a Red Sox fan according to his dad.

–Spot News 1st Place: Hyunsoo Leo Kim/The Virginian-Pilot–A Norfolk police pauses next to police vehicle as he investigates the scene of shooting where Norfolk Police Officer Brian Jones was killed in the line of duty late Friday, at the 7400 block of Wellington Road in Norfolk, Va. 2014.

–Spot News 3rd Place: Rob Ostermaier/Daily Press–Friends and family of stabbing victim Taiwo Douglas-Wells react to the news that he had died from his wounds sustained in an attack behind Newsome Park Elementary School.

–Spot News HM: Griffin Moores/The News & Advance–An injured driver who crashed his drilling rig through a guard rail along I-64 screams as rescue workers attempt to remove him from an embankment in Waynesboro on Sept. 24, 2014.